The future of climate change education and activism now has a younger and more diverse audience. 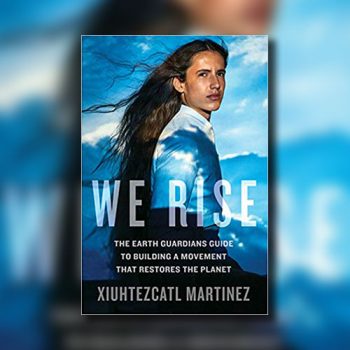 There are still people such as Bill McKibben, Winona LaDuke, and Bill Nye championing the cause, but now with Xiuhtezcatl Martinez’ book, We Rise: The Earth Guardians Guide to Building a Movement that Restores the Planet, there is more hope that a new wave of activists is forming. The book outlines what has been happening to cause climate change, as well as what people can do to get involved with the movement. The differences in this book verses many others in the same category are significant.

First, Xiuhtezcatl (as he notes on the first page, pronounced ‘Shoe-Tez-Caht’) is 17 years old and has been active in educating others about climate change since he was very young. He shares ways he has marched, spoke, and rapped around the country and world to bring awareness to the issue. He brings awareness to the fact that the face of who is affected by climate change is usually different than who is spreading awareness.

At the end of every chapter there is a call to action on what you can do.

This does not just include the things we hear all the time: shut lights off, use LED bulbs, carpool, etc. It goes further, to our own belief system: make sure you are including everyone who needs to be in the conversation, invite all groups and peoples. Find or create a group to discuss and educate others through activism, as well as educate yourself on how we got here in the first place.

The structure of the book is reader-friendly, though as was discussed in the Climate Generation book club meeting, it may be a bit difficult as an audiobook. The chapters are punctuated with interviews from current activists such as Paul Watson from Sea Shepherd, Vandana Shiva, Bill McKibben, Van Jones, Mark Ruffalo, and more. From an educational standpoint, the book is most appropriate for high school or college level reading. The writing is not necessarily beyond comprehension of middle-level students and parts could be used in 6–8 grade classrooms, but as a whole it would be better suited for older students.

There are a lot of options for using only part of the book in the classroom.

The interviews would make a great discussion point, comparing and contrasting the types of activism each individual uses. Also, a discussion about the different aspects of climate change each interviewee is associated with could be used to spark a discussion with students about what they are most passionate about. The last chapter titled “A Rising Generation” focuses on what Xiuhtezcatl’s generation should and can focus on right now; that chapter alone could be used as a follow up to climate change education in schools.

The book partners nicely with Climate Generation’s community convenings that have been hosted throughout the state of Minnesota. Xiuhtezcatl is putting his personal climate story out there and asking that we do the same. In the last chapter, he asks that we examine the public narrative we tell people and use it to move forward in our mission.

The public narrative section could be used with middle-school- through adult-aged students and groups. In the last chapter, all of the steps are great to implement in any action project: the tips on organizing a group, leading them through SMART goals, and assessing the outcome of what the project was. They are clearly outlined yet adaptable. A good reminder for any generation is that we need to include social media in our endeavors. The youngest generations are raised on being connected virtually, which can be used to connect people in person through notifications of events and rallies.

When reading a lot of climate change books, often we can be left with a feeling of hopelessness and guilt. This book leaves the reader with hope and feeling ready to keep fighting, knowing that there is another generation that will follow us and keep advocating for the health of everyone on the earth.

We can keep the push for clean air, water, and land going until everyone understands that it is the only way for the planet and life on it to be sustained.