I wasn’t initially into Game of Thrones.

Death, torture, and vulgarity aren’t themes I usually pick for a new TV show, but after watching over my husband’s shoulder one evening, I decided to give it a shot. We started the series and in about three episodes I was hooked. I remember having my phone and computer out for much of the first season as I was studying the family trees of the various houses (I’m House Stark, all the way!) and following the story on a map of Westeros and Essos. There was an interesting theory about the coming winter actually being connected to climate change. I had to keep watching to find out! 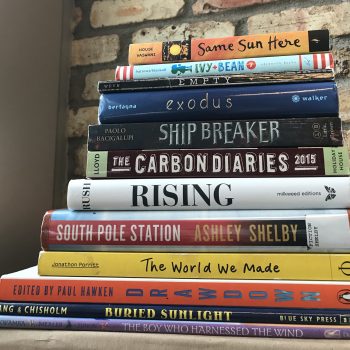 In my position at Climate Generation, I lead our #TeachClimate Network. This national network of educators allows us to come together each month to discuss challenges and successes of climate change education. Oh, and we also read some pretty awesome climate change fiction (cli-fi) books. Our goal in reading cli-fi is to bring climate change to English/Language Arts classrooms, book clubs, and science classrooms in a meaningful way. Middle school students appreciate dystopian fiction because they can relate to the content.

In David Sobel’s article, “Feed the Hunger” (Orion, 2012), Sobel describes the phenomena of a lack of hopeful environmental fiction for young adults and attributes it to the “…rising tide of hopelessness, along with rising seas level [that] is lapping at the toes of our young adolescents.” This is in turn making “…our young adult fiction different from the young adult nature fiction of thirty years ago.” Surprisingly, Sobel doesn’t argue that this is bad thing, but instead that by writing about the issues students worry about every day, the problems become “…somewhat more manageable, more quantifiable.” Even more so he advocates for the importance of books like The Hunger Games because of the resilient examples of heroes they provide for our students.

This October, Game of Thrones author George R.R. Martin came forward to confirm a long-winded rumor that the impending winter in the books and TV series is actually an allegory to climate change.

“There’s a certain parallel there,” Martin explained. “The people in Westeros are fighting their individual battles over power and status and wealth. And those are so distracting them that they’re ignoring the threat of ‘winter is coming,’ which has the potential to destroy all of them and to destroy their world” (Chen, HuffingtonPost.com).

The timing of Martin’s statement couldn’t have been more opportune with the IPCC Special Report released last month that highlighted the need for action NOW and the recent release of the 4th National Climate Assessment which “assesses the science of climate change and variability and its impacts across the United States, now and throughout this century.”

Watching Game of Thrones, I have seen many Westeros characters not accept that the White Walkers (characters that embody the coming winter) are real until they were forced to confront them for themselves. This is another fascinating parallel Martin depicts, as too many Americans are unable to see climate change as a threat and probably won’t accept it until they are personally affected. This shows the importance of using stories as a way to teach about the impacts of climate change. Those who don’t accept the science don’t want to see more graphs and data; they will hopefully understand the problem (and its solutions) by knowing how their neighbors and community are affected.

Having your students read cli-fi books can help them understand the current impacts of climate change and get them ready to participate and lead on solutions.

Helping students craft their personal climate stories to share with their family and community members can also be a powerful way for them to communicate the local impacts and solutions to climate change.

Rarely does the climate change education discussion include developing students’ empathy, hope, and resilience to a warming world. Integrating fiction and other literary non-fiction into climate change education can be a useful and beneficial way to bring these less tangible, difficult to teach, yet important lessons to students. In Game of Thrones, the analogy may be buried amongst wealth, power, and war; but climate change is actually front and center for viewers. My hope is that Americans see this threat – unlike those in the Thrones universe – before it’s too late.

Check out our new, free resource—Climate Fiction and Other Important Readings to Support Climate Change Education. This book guide will help you bring climate change books to your English/Language Arts classes, book clubs, science classes, and beyond. Climate change fiction and non-fiction books are included, along with book summaries, reading levels, discussion questions, and relevant news articles to bring the content to life.