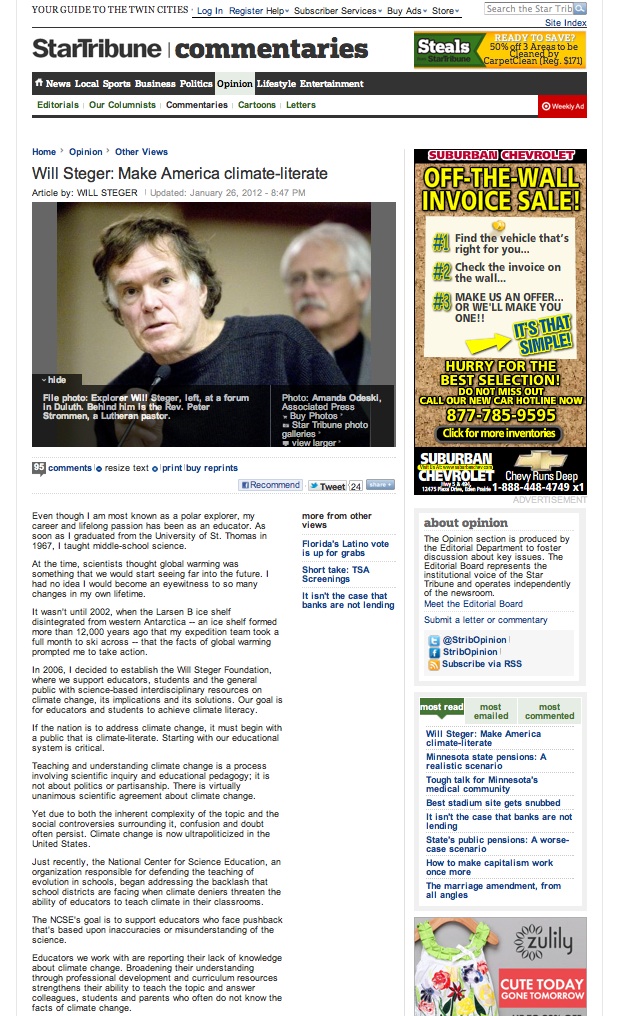 MINNEAPOLIS, MN – Even though I am most known as a polar explorer, my career and lifelong passion has been as an educator. As soon as I graduated from the University of St. Thomas in 1967, I taught middle-school science.

At the time, scientists thought global warming was something that we would start seeing far into the future. I had no idea I would become an eyewitness to so many changes in my own lifetime.

It wasn’t until 2002, when the Larsen B ice shelf disintegrated from western Antarctica — an ice shelf formed more than 12,000 years ago that my expedition team took a full month to ski across — that the facts of global warming prompted me to take action.

In 2006, I decided to establish the Will Steger Foundation, where we support educators, students and the general public with science-based interdisciplinary resources on climate change, its implications and its solutions. Our goal is for educators and students to achieve climate literacy.

If the nation is to address climate change, it must begin with a public that is climate-literate. Starting with our educational system is critical.

Teaching and understanding climate change is a process involving scientific inquiry and educational pedagogy; it is not about politics or partisanship. There is virtually unanimous scientific agreement about climate change.

Yet due to both the inherent complexity of the topic and the social controversies surrounding it, confusion and doubt often persist. Climate change is now ultrapoliticized in the United States.

Just recently, the National Center for Science Education, an organization responsible for defending the teaching of evolution in schools, began addressing the backlash that school districts are facing when climate deniers threaten the ability of educators to teach climate in their classrooms.

The NCSE’s goal is to support educators who face pushback that’s based upon inaccuracies or misunderstanding of the science.

Educators we work with are reporting their lack of knowledge about climate change. Broadening their understanding through professional development and curriculum resources strengthens their ability to teach the topic and answer colleagues, students and parents who often do not know the facts of climate change.

For instance, our curriculum and resources cover the basic dynamics of the greenhouse effect and the carbon cycle, and explain the differences between weather and climate, and what scientists say about present and future changes they are seeing, some of which I saw firsthand.

We need young people to be able to understand the basics of the Earth’s climate system, to know how to assess scientifically credible information about climate, to communicate about climate change in a meaningful way and, most important, to be able to make informed and responsible decisions about actions that affect the climate.

The Steger Foundation now works with hundreds of teachers to educate them to present the true scientific story.

I still find it hard to believe that the Larsen B ice shelf disappeared because the Earth is warming. To me, that was impossible. But it is gone. I look forward to the day when all Minnesotans have learned to read the climate as they learn to read a book, and to understand what it means.