All throughout Copenhagen there are numerous locations and events relating to the Climate Change Conference, outside of the main Bella Center negotiations.

The World Wildlife Fund has an awesome set up in Copenhagen’s Nytorv square dubbed the Arctic Tent. Outside of the Arctic tent are beautiful art exhibitions in the form of photographs and a main attraction seen completed above. The attraction is an ice sculpture of a polar bear, created by Mark Coreth-a renowned wildlife sculptor, and team. 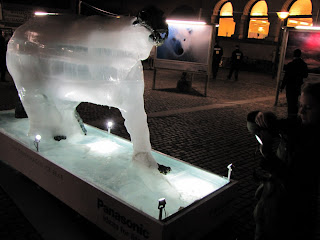 I’ve been “watching” and internally named him “WaabiMakwa”-White Bear. He represents not only his own dying and endangered race in the Arctic, but the Indigenous and human race of the world. He was completed December 5th, standing 1.8 meters high-representing the average height of floating sea ice in the Arctic. The ice at that height is too thin to remain frozen throughout the year, resulting in melting, just as WaabiMakwa has begun to do, and rising of sea levels. Eventually only his bronze skeleton will remain and only his story and spirit will live on. It is important that we remember Waabi Makwa’s reality, as we are brothers, and what happens to our brothers it is said, will eventually happen to us as well. 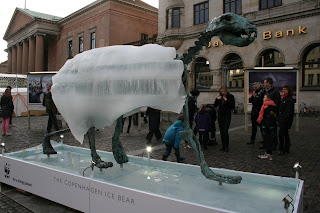