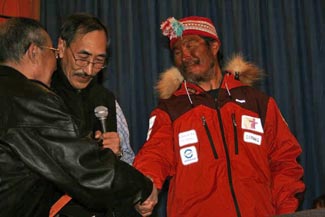 Iglulik is located on a small island on the northeastern corner of Melville Peninsula, 50 miles north of Hall Beach and about 1,000 miles north, east and south if you take the Global Warming 101 Expedition route from Iqaluit. The name “Iglulik” means “there is an igloo here” in Inuktitut and its 1600 residents are known as Iglulingmiut (“people of the igloo”). Iglulik is considered the cultural capital of Nunavut by many because of the cultural continuity that has been preserved in tradition and language. It is one of the most traditional Inuit Communities in Nunavut and one of the oldest in the north with over 4,000 years of history in one place. Through an active elders group (Inullariit Society), the elders teach valuable land skills and traditional sewing techniques to the community. The Igloolik Research Center has spearheaded an oral history project aimed at preserving the elders’ traditional knowledge. Iglulik is also the home of well-known stone, antler and ivory carvers as well as two video production companies, Isuma Productions, which specializes in cultural programming, and a local office of the Nunavut-wide Inuit Broadcasting Corporation. 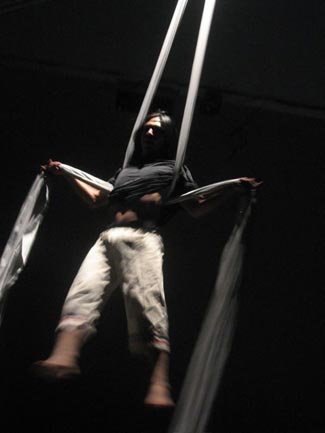 We got a good taste of Iglulik culture today, both literally and figuratively. The town has continued to extend their very warm welcome to our entire team, hosting a community feast in our honor. We began the events this evening by processing on to a large stage accompanied by two bagpipers (a father and son team). After a prayer and welcome from the Mayor, we were honored to receive framed certificates recognizing our expedition, our mission and our successful arrival to Iglulik. We gave a slide presentation of images from our expedition and shook hands with each of the 400 people that filled the small gymnasium.

Shortly after the presentation the chairs were cleared away and an abundant display of fresh caribou and char was spread over tarps on the floor. Cookies and bannock (Inuit bread) lay piled up on tables nearby along with several boxes of pizza. There was another short prayer, then a mad dash to the food.

Later in the evening there were still more celebrations to be had. The widely known and locally grown Artcirq (Arctic Circus performance group) did an incredible performance as an opener for the community talent show. The group formed in 1998, in response to teen suicide in Iglulik, and seeks to empower Inuit youth through movement, dance, and circus arts. The performance was as rich with cultural imagery as it was in stunning acrobatics. The 10 young members seemed full of strength and pride, moving the audience to huge applause when the performance ended. 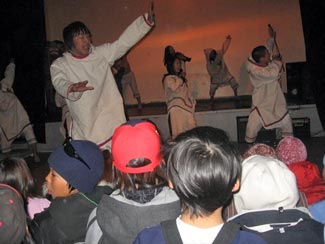 We finally made it home close to midnight, exhausted but full to the brim with Inuit hospitality.