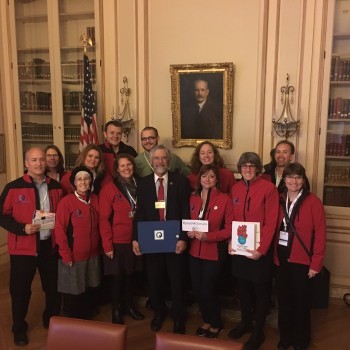 Today we had the honor of meeting with Dr. John Holdren, President Obama’s Science Advisor, at the American embassy in Paris. It was quite an experience!

Check out the other educators’ blogs for more details on that meeting. One thing I will highlight is something John said that was similar to my comments on December 3rd, when I spoke on MPR’s Climate Cast. He said,

“The solutions [to climate change] have to come from both the top-down (from governments) and the bottom-up (from our individual actions).”

COP21 is all about what governments will do to reduce emissions by replacing dirty power plants with renewable energy – in other words, emissions cuts on a large scale. It is the top-down solution. But, we know that the emissions pledges that countries have made will not limit the global rise in temperature to less than two degrees, much less the 1.5 degrees demanded by vulnerable nations. The best estimates are that, with an agreement here in Paris, we will still raise the temperature by about three degrees. A positive step, no doubt, but not enough.

We, from the bottom-up, need to help bridge the gap. This is done through individual and small-scale actions such as buying LED lights and reducing our personal carbon footprints through conservation and efficiency. If all of the high-consuming people of the world (that is us, folks) reduced our consumption by 20-30%, we would be in much better shape regarding climate change.

This can also be pushed along by local and state governments. Cities and states can make huge impact on reducing emissions. The mayor of Rochester, MN announced earlier this fall that he supported a goal of 100% renewables for his city by 2031. Minnesota is one of the states that is leading the country in this transition by investing in renewable energy. These are huge improvements and important changes. 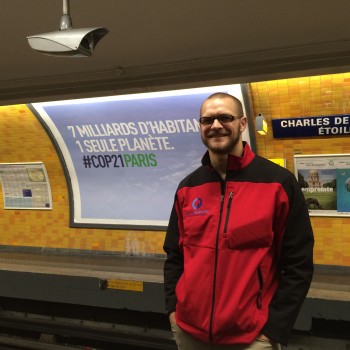 Today I heard a group of mayors announce all of the things they will be doing to respond the challenge, including the mayors of St. Paul and Dubuque, IA. It is this level of government that can make the biggest impact on reducing emissions from the bottom-up, and all of these actions could add up to protecting the world from the worst consequences of climate change. We need to support and encourage local leaders in doing that – in bridging the gap.