If you have recently seen in the news large-scale, high visibility actions staged by youth in and around the Bella Center, I would like to provide another perspective on what’s really happening when the media isn’t watching. The “front page worthy” photos the media chooses to portray are not truly representational of all the work that’s actually being done by youth around the world during the conference. I want to provide some insight into the intensity of the projects youth are working on as they propose global solutions to the climate crisis.

All youth are part of an official provisional constituency called the YOUNGOs, thus the group now has the opportunity to propose amendments to policy during certain official UN sessions. After the Conference of Youth during the first weekend we arrived in Copenhagen, a global movement has erupted among youth to push for policy that will not neglect those who suffer most from climate change. The YOUNGO group, now known as IYCM (International Youth Climate Movement– and yes, everything at the UNFCCC is in acronyms), has mobilized to work in specific policy groups focused on areas of mitigation, adaptation, finance, and tech transfer in order to propose amendments to the bracketed papers released by different delegations. (The goal is to make the bracketed language unbracketed and put into permanent context. Before any legislation is passed through the UNFCCC, entire papers are bracketed and part of the negotiations entails deciding what language will stay and what will have to be amended for countries to agree on the legislation put forth.) Each of the delegates from our Expedition Copenhagen has been involved with some sort of policy focus and/or other more regionalized groups.

The opportunity for US youth has also been to be involved in the US youth delegation to support the US to make strong climate legislation to be passed through the Senate. Underneath the US delegation are many non-governmental organizations that are all collaborating through policy work as well as planning interventions (think of them as registered visual displays/actions -like what the news is covering) and scheduling meetings with top negotiators as they arrive in Copenhagen.

Our WSF delegation has been involved in many of these arenas, and we’ve been working almost round the clock while bringing a Midwest perspective to the table. The decisions made at COP15 will directly affect ALL countries, including the US, so it’s important to show the world that youth are connecting and collaborating, not only through the US but as a global unit, to promote a strong, just, and equitable treaty that will reach a binding agreement. Just remember that for each photo that depicts an action, there are many photos that could have been taken depicting the many youth huddled in circles around the Bella Center for regional and international meetings occurring throughout the day, briefings with heads of state where youth pack the rooms to capacity, and youth sifting through stacks of policy papers to understand, interpret and write amendments to legislation. We’re living on coffee and adrenaline inside this Bella Center bubble, but the real force driving us is not the energy we have through the visual actions but the underlying hope we collectively share for the future we wish to have and will create. 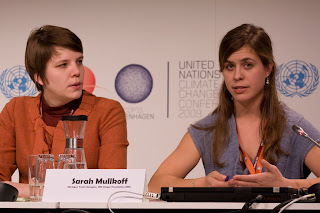 Our very own Sarah Mullkoff speaks before an audience at the Bella Center as part of a Midwest panel with Rep. Kate Knuth (D-MN). Will Steger Foundation, © 2009 Jamie Horter