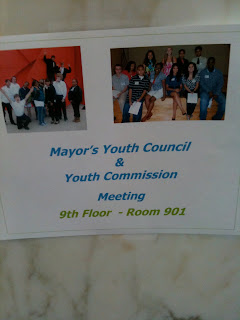 Governments need to start looking at Grand Rapids, MI for new ways to engage citizens in local politics. This week I gave a presentation to Mayor Heartwell’s Youth Council and Youth Commission, a group of about 20 middle and high school students that have been agents of change in their community. These young people follow what is happening in the city and write proposals giving suggestions about next steps from the perspective of youth. Tuesday, November 10th City Manager Greg Sundstrom proposed 125 job cuts to help close the city’s deficit of $28 million. After my presentation the students looked over documents explaining these cuts and are preparing for a meeting with the Mayor next week to provide their suggestions.

The budget crisis that is being faced Grand Rapids right now is occurring around the country – cities are facing huge deficits and need to find a way to close the gap. But maybe the way decision have been made in the past will not work for our future. It’s a step in the right direction for the City of Grand Rapids when they created a way for youth to get involved in local politics. It’s more sustainable, and I view it as a great opportunity for the city to have all voices in the community represented, especially when making so many tough decisions. And it is even more important when these decisions will affect the residents of younger generations the most. Giving these young, active students the chance to voice their opinion about an issue will help ensure that we will have future leaders who already understand the need to represent everyone in their community.

At the negotiations this December we need to be striving for the same kind of representation. But this time our community is not our city, state or country – rather we are a part of a global community. And if we want all voices to be heard, then it is important to support others in their quest to join the conversation. Typically however this has not been the story.

Developing nations – such as India, the Maldives, Thailand, Brazil – are more negatively affected by the rise in global greenhouse gases, even though they produce the least amount of emissions. This situation puts the more polluting developed nations – including the United States, European Union, Australia, and Canada – in a more powerful position at the negotiations. But it also implies that these nations have a moral imperative to do something to solve the problem. We, in the developed countries, have a tremendous responsibility as global citizens to take bold action on climate change and assist other countries as they adapt.

One of the easiest ways developed nations can begin this process is by supporting teams of negotiators from developing countries. Historically developing countries have been able to send very few, if any negotiators to the conference due to a lack of financial resources, further causing their views to be underrepresented. And unfortunately the number of youth at these negotiations follows this same trend. What developed nations can do is help fund delegations, including youth to improve the overall representation. But then they must also listen to these countries and finally take responsibility for their role in helping to cause anthropogenic climate change.

It is important to the International Youth Delegation, and to delegates with the Will Steger Foundation, that there is broad representation as these meetings. Especially the youth voice. Like the students in Grand Rapids who will be affected by the decisions made now more that any other demographic, so to will the youth of the world at these negotiations. With a broader representation of youth viewpoints at these negotiations we have a better likelihood of achieving a bold, just and binding treaty. It is the youth voice that will hold key countries accountable and remind participants of what is at stake.