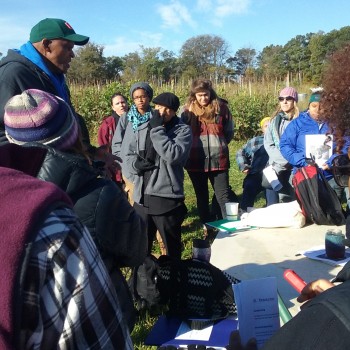 Sunday, October 4, I reached the end of a winding dirt road where the Growing Power Deep Winter Farming workshop would begin.  I still wasn’t sure what to expect and if I would benefit from what I learned that day.  In any case, from the moment we arrived at the Women’s Environmental Institute (WEI) farm, two other YEA! MN students (Isabel and Annie) and myself were in awe.

Stepping out of the car and into the cool, fall, farm air was very refreshing.  Around us were apple trees, and we could see crop fields in the distance behind hoophouses and compost piles.  Near the cluster of tables outside where everyone was gathered for breakfast and coffee was a big chicken coop.  We have chickens in the cities, but you won’t ever hear the yell of a rooster.

Karen Clark, a member of the WEI and MN State Representative, and the one who personally invited the three of us to the workshop, led us up to the house to meet the director of Growing Power, Will Allen.  Will was excited to have high school students there, and voiced he wants every high school to have a garden, where students can learn about and tend to. 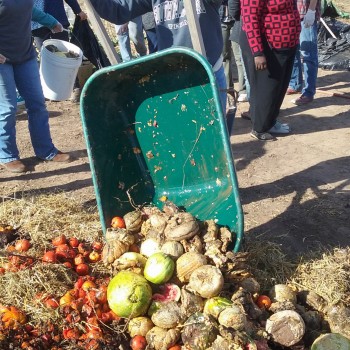 After breakfast, we all headed to the fields where Will talked us through the importance of compost, what goes into it, and how it benefits crops.  Then, we went to work.  We started by collecting rotten melons and tomatoes and hauling them over to an already established pile of rejected crops including lots of cabbage and other lettuces.  This is what gives the soil nitrogen.  To start our compost pile, we spread wood chips, straw, and sawdust out in a row to give our compost it’s other main element: carbon.  Then, we started layering it with our nitrogenous crops, then more carbon, then nitrogen, and so on until we had a tall pile that we watered and eventually covered with wood chips and such.  The end result was a big compost pile that would be ready in about a year.  People from several different generations were there working on it, and it came together really quick with so many people.

Following a delicious lunch, we split into different workshops.  I went to an  aquaponics workshop, where I learned the details of the system, from how to choose your crops, to what you should feed your fish, to the ideal pH of the water, and many other details I wouldn’t have thought about.

Although I don’t know if I’ll be crafting such an intentional compost pile or setting up an aquaponics sytem anytime soon, I know I definitely benefitted from the day.  First off, it was great simply  being able to see the application of what I learn in school, like where carbon and nitrogen are found, and seeing the importance of pH somewhere.  It was also great to know that sustainable agriculture is possible, and there are many people doing it.  Another highlight was talking to the other people there.  I was surprised to meet another person from my high school there and find out what cool things he was doing.  He works on an urban farm nearby, where they just harvested a squash from centuries old seeds given to them by Winona LaDuke.  I also met another student from a different high school nearby that I’m excited to connect with.

All in all, the workshop was informative and I learned about solutions to climate change I was less familiar with, and got to spend a rejuvenating day on a gorgeous farm.