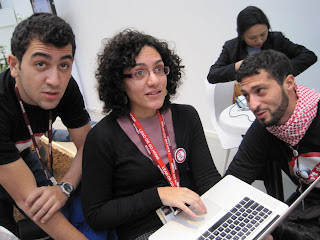 In Copenhagen, our delegation tries to create international partnerships with youth groups from around the world. During my first week here, I followed around youth activists from Middle Eastern countries such as Egypt, Lebanon and Oman. These youth hail from countries where activism is rare and climate activism even rarer. Many of these young people are building a grassroots movement from scratch, in countries that produce most of the world’s oil.

The youth I met were enthusiastic in teaming up with Midwest youth for future projects. While no members of our delegation are Arab-American or of the Muslim faith, the Midwest is one of the regions of the U.S. with the largest populations of Muslims living in the U.S. In Illinois and Indiana, Muslims make up just under 4 percent of the population and just under 2 percent of Michigan’s population according to Census data from the 1990s. Those numbers are only growing.

Here’s the article I wrote about some of these youth from the Middle East, for The Media Line, an American non-profit news agency based in the Middle East.

Picture: (Left to right) Hussein Hariri, 19, Sarah Rafeet, 25 and Tarak Tayara, 28, are part of the tiny fraction of Arab youth organizing against climate change in Copenhagen.