On a cold and rainy Earth Day, one hundred high school students braved the weather to rally for a cleaner Minnesota. The Youth Environmental Activists of MN (YEA! MN), a program of the Will Steger Foundation, planned and facilitated a Young People’s March to the Capitol in support of strengthening our state’s commitment to clean, renewable energy. They marched to the Capitol to join the Minnesota Clean Energy and Jobs Campaign Day of Action. Cole Norgaarden, YEA! MN co-chair, set the tone for the march with his rousing and poignant speech on the power of youth leadership.

My name is Cole Norgaarden, I’m a senior at Blake School and I serve as a co-chair of Youth Environmental Activists of Minnesota. The reason I’m here today, and the reason why all of you are here today, is because we are currently experiencing a truly pivotal time for the climate movement, both as a state and a nation. Today’s marches and rallies and bike-rides and protests are riding on a wave of vibrant activism that is stronger than ever before. Don’t believe me? Ask the 50,000 citizens who flooded Washington D.C. in February to send our President a message about the Keystone XL pipeline. Ask the 150 people who showed up on a Monday afternoon in March to tell Senator Klobuchar to oppose that same project. Ask the 62 organizations and agencies that have been working throughout this long, cold winter to push a bold renewable energy standard through the Minnesota legislature. But I don’t need to convince you that this is an important moment—you see it every day. People are taking notice and taking part, helping to build this movement into a force that can realistically change history. The problem is, we’re not the only ones are growing stronger. The challenges we face are becoming more alarming by the day.

In fact, it’s become difficult to keep up with the bad news:

And of course, April 17: 14 people die in Texas fertilizer plant explosion , releasing untold amounts of ammonia fumes into the air.

This is what we are facing: a world being driven out of control by our own actions. It’s hard to believe that some people, especially those who govern us, still haven’t connected the dots. But there is good news: we are just as capable of doing good for the Earth as we are of damaging it. Our hands were built to heal, and not hurt, everything that surrounds us. The headlines may be daunting, but for every disaster we see in the news there are hundreds of gatherings like this that don’t make the front page but are still adding to the momentum we need to succeed.

Back in February, when I was one of those 50,000 who swarmed the White House over President’s Day weekend, I had something very interesting happen to me as the rally was coming to a close. Our YEA! MN delegation was trying to find the rest of Minnesota group that had come down to D.C. by bus when a middle-aged man in his fifties or sixties came up to us and said two weighted words: “I’m sorry. I’m sorry you had to be here today.” He offered no explanation of this statement and it was clear that none of us knew him, but we all knew what he meant. He was sorry that, in many ways, his generation had failed ours. And he was sorry that youth like us had to take to the streets just to demand a future that is rightfully ours. It must have felt great for him to get those words off his chest, but what were we supposed to do with that? Apologies do not cut carbon emissions. Apologies do not alleviate the drought that still plagues half of our country. Apologies do not reverse the damage done or lives lost from Hurricane Sandy. Saying sorry does none of these things–so it is our job today to prevent the need to say it in the first place. We must act now so that we don’t have to apologize to the generations that come after us, so that instead they’ll thank us for what we accomplished. It isn’t too much to ask. 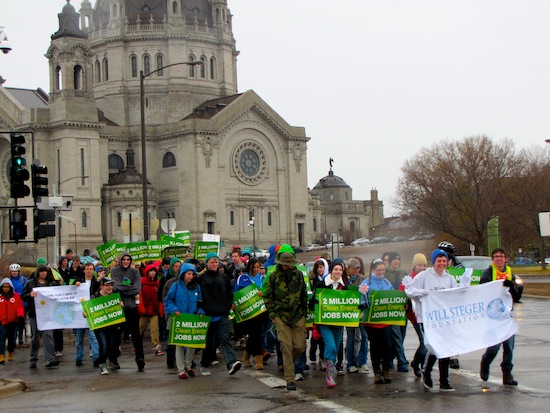 On a cold and rainy Earth Day, one hundred high school students braved the weather to rally for a cleaner Minnesota. The Youth Environmental Activists of MN (YEA!MN), a program of the Will Steger Foundation, planned and facilitated a Young People’s March to the Capitol in support of strengthening our state’s commitment to clean, renewable energy. They marched to the Capitol to join the Minnesota Clean Energy and Jobs Campaign Day of Action. Cole Norgaarden, YEA! MN co-chair, set the tone for the march with his rousing and poignant speech on the power of youth leadership.

Today we have the opportunity to do one of the most crucial things we can do—raise our voices and send a message to the people who represent us. They have the power to coordinate progress on a large, institutional scale, and to provide the tools necessary to start tackling the laundry list of environmental issues that plague us. Pressuring them is one of the most effective things we can do as individuals, especially as young people who may not yet be able to vote. So hold your banners high and don’t be afraid to make a statement: we are youth fighting for our future, and our time is now.