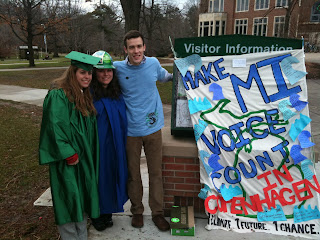 In Grand Rapids the organization Local First that has helped spur a movement in the city to think and buy local. The popular phrase, Think Globally, Act Locally has been an inspiration to citizens, students, and children alike and it has especially had a meaningful impact on me. This simple phrase is what has driven me to do the work that I do in my community, and it was only reinforced during the negotiations in Copenhagen. Storytelling, one of the main ways that I connect with my community and with what’s happening around the world also proved to be very important. First, to make sense of the labyrinth that was the Bella Center I found it was best for me to choose one or two stories to follow and watch unfold until I could share it with others. For example, I decided to pay close attention to the actions of the U.S. Youth Delegation so that I could tell the media and our decision makers about what we were doing at the negotiations. With 500+ U.S. youth participating in the talks it’s easy to imagine the wealth of stories to share.

Secondly, telling the narrative of Expedition Copenhagen and highlighting the Midwest to everyone I met enabled me to make connections with people from around the world that had similar experiences. Listening to other stories demonstrated the broad implications of climate change and helped me generate new ideas for solutions based thinking. The simple act of sharing my story was the best way for me to act locally on a global scale. What I already knew, but what was made even clearer during the negotiations was that our local stories connect us to people from around the world. We are all interconnected, and our stories are powerful enough to cross every barrier. There are billions of people around the world that have similar struggles and victories as you and me. Circumstances may be different, but we can usually find a place where our stories cross paths. In Copenhagen I heard and followed hundreds of these accounts and shared the story of the Midwest with everyone I met. Ultimately, we have to remember that all of these stories go back to our roots.

The work that I have been doing in Grand Rapids, and what each delegate on the Expedition Copenhagen team has been engaged in is what made it critical that we took part in these talks. Global climate change is a huge issue to tackle with thousands of angles to look at. The only way to remain grounded and in touch with reality is to hear about the effects of climate change on communities by people from those communities. That is why thousands of civil society members registered to participate in these negotiations – they wanted, rather needed, to share their narrative to remind decision makers why they must take significant action on climate change now. During the 1992 Earth Summit in Rio de Janeiro, there were over two thousand registered NGO organizations. Since that time the number of civil society members participating in climate talks has increased significantly. Copenhagen was the largest convergence of people on the issue of climate change with over 45,000 registered people plus thousands more staying in the city to help organize outside events, marches and protests.

Reflected in this number is the amount of attention currently being paid to the climate crisis. Over 110 heads of state took part in these negotiations, and we are now closer than ever to signing an international treaty. Thus, it is easy to assume that the thousands of stories shared by these people are impossible for the decision makers to miss. Without these narratives we would not be this close to taking the bold action that is necessary because they are the driving force behind the positive changes taking place.

We cannot have a sustainable world without first starting in our homes, schools, cities and governments. After we start to strengthen our roots can we begin to grow the movement internationally. The fact that in Copenhagen we were on the cusp of signing an international legally binding treaty to stop global climate change demonstrates how important these local actions are to securing a safe and just future. The purpose that civil society and Expedition Copenhagen delegates served was to act as visible representations of the effects of and solutions to climate change.

The stories from my community keep me grounded, and they are the reason why I went to Copenhagen. The lessons I learned from the stories I heard and followed during the negotiations are why I came back more empowered, more inspired, and more ready to work locally and help transition our global society to be more just and sustainable. We have to focus local to impact global and we have to remember that we are not insignificant. What we do in our local communities is not insignificant. It’s the most important work that can be done.