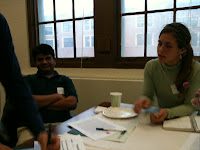 The Copenhagen climate negotiations are fast approaching- just 30 more days until we are there! In preparation for the talks I have been focusing on learning more about my role and how I can be most effective. While reading blogs, and keeping up to speed with the progress of the US Senate climate bill have been helpful, there’s nothing better than gaining actual experience. That is why yesterday I choose to participate in an UN climate negotiations simulation at Michigan State University (MSU), hosted by their Environmental Science and Policy Program. Sarah, another MI delegate and an alumni of MSU, attended the event with me.

The purpose of the simulation was to highlight the difficult task ahead if the world is going to combat climate change. The negotiations this December are very important in ensuring that we begin to build a clean and just energy future. After completing the simulation is was even more apparent that we need to start taking action today, regardless of our state or national legislation. 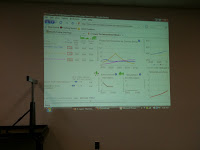 After splitting up into groups we were briefed on the tools being used in this simulation. Students at MIT along with the Sustainability Institute have created C-ROADS, a climate change modeling device that inputs the different group’s emission reduction targets and produces the scenario in comparison to maintaining Business as Usual (BAU) policies. The version that the UNFCCC will be using in the negotiations is more complex than ours, but the results still matched up closely to the predictions made using that model.
Our frame of reference was the year 2100 and the goal was to be at 400 ppm of CO2 in the atmosphere with no more than a 2* rise in temperature, and very little if any sea level rise. BAU policies would result in a world unknown to any human civilization.
The important thing to remember through these negotiations is that the developed nations, particularly the United States, have contributed significantly to climate change. And the developing poor countries are most effected by the shift in climates while contributing the least, if at all, to the problem. Understanding this concept is key for negotiators if they want to develop a strong and bold climate treaty.
The simulation was split up into 3 negotiating periods. During the first round each bloc of countries only negotiated with themselves. The reduction targets and money put into a fund for mitigation and adaptation were not enough, and negotiating this way proved to be ineffective. The second round however yielded even worse results. The Developing A and Developing B countries decided to form a coalition and demand concessions from the Developed countries before attempting to negotiate. As a result the Developed countries felt no reason to talk further, and the round ended with no progress made. 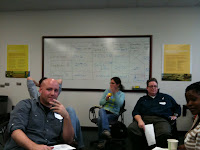 The final round was the last chance that the world had to come together and generate a comprehensive emissions reduction target for the different groups and to provide the necessary funding needed to help developing countries mitigate and adapt to climate change. In this round the Developed country negotiators chose to split up and talk with both developing country blocs separately. Every group gave into certain concessions put in place by all negotiators and we were able to come up with a new set up numbers to put into the model.
As negotiators for the world we were confident that we had come up with something that will put us on the path to be at 400 ppm of CO2, 1-2* temperature increase, and no sea level rise by 2100. Boy were we surprised.
As the results came in it was obvious that even with our best efforts, we missed the mark by 34%. While we significantly decreased the threat, the earth’s atmosphere would still be above 450 ppm of CO2, and witness a 3* rise in temperatures as well as dangerous sea level rise.
What I took from this simulation is the extreme importance of these negotiations. We have the ability to make significant headway in reducing our GHG emissions today, and the money to fund initiatives to aid developing countries. We also have the support of the public. But what is currently lacking is the political will to come up with a bold, just and binding treaty in Copenhagen. And without that we will have even tougher decisions to make in the future. This simulation helped prepare me for what the actual negotiations will look like. My hope is that negotiators will be more successful than we were in coming up with a plan. I know we can do it, policy makers just need to realize that they can as well.