I can only imagine what the Kyoto Protocol days were like, with so much hope and anticipation for the future. I remember feeling that way in Copenhagen, too. Maybe because I haven’t been here the entire two weeks, maybe because I’m feeling…unsure. I’ve learned so much in the last week, I am overwhelmed.

I received an amazing compliment from a long time United Nations ambassador. She said, “I like you, you’re quick..”, as I stated that the introduction and inclusion of Traditional Ecological Knowledge (TEK) are like the sprinkles on top of a carbon trading layered cake! I was super excited thinking of TEK at first, because it sounds so good! As though, yes – they are listening to us! I’m sure $75 million sounded good to our neighbors as they signed the dotted lines, too. The Keystone Pipeline just had a 200,000+ gallon spill today in South Dakota…that pipeline sounded good to some folks, too. When really, it appears there is no indication to include the HOLDERS of that Traditional Ecological Knowledge; they only want the information.

It is the holders of that information, though, that keep it traditional. We talked about so many communities being taken from and what they are being given. I spoke today in my webinar about the proposed carbon trading agenda item in Bad River. I was astonished! I could not believe that we were being approached with carbon trading! As some say though, it’s only a matter of time. They will come for our resources. We have to stay strong, stay vigilant, and even weary!

I was on the train, really trying to put together what “climate change” means to so many. There are so many facets, it’s hard to wrangle. To think of the contributors on a large scale, how governments and corporations pitch to communities. We can’t wait for corporations and governments to iron out their wrinkles while the world suffers. People are suffering! These stories are not just stories, these are LIVES at stake! How is it all connected?

Climate change includes so much, we struggle for actions and justice! What some of the governments and companies do, as polluters, is sometimes too much to think of and comprehend. It’s unbelievable. I think of my amigos in Guatemala who suffer so much from violence – YES, violence – as these companies try to strike fear into their communities so they won’t have any resistance. Illnesses come as they are ill from contaminants, and poverty strikes as their resources are being ravaged. What can we do? We share, we pray, we stand together! What do we do when they come for us? STAND UP, FIGHT BACK!! 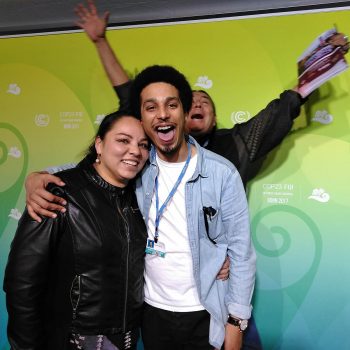 I had the honor of meeting new friends and running into old ones at COP23! I’m ready to go home and be grounded. Ready to go home and work. It’s hard sometimes, in reflection, to know if you had an impact. You have to carry it within yourself that you did what you could. I suppose that is reflected in many aspects of life.