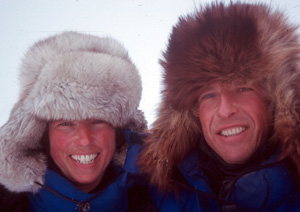 For the last thirty years, world-renowned polar explorer Richard Weber has traveled and lived in the Arctic. He has participated, led, and organized more than forty-five Arctic expeditions. His first time to the pole was on Will Steger’s 1986 expedition and he has since returned to the pole more times than anyone in history. Global Warming 101 Expedition member Elizabeth Andre interviewed Richard about the climate changes he has witnessed in the Arctic.

Listen to the interview.

Richard: I didn’t think it would be possible to see changes because the variations in the weather from year to year are so different and when you’re walking on the Arctic Ocean you’re looking at such a relatively small piece of ice, but last year when we were up there it was really really different than twenty years ago. The ice is visibly thinner, the pack ice, when you come to a crack and look in it’s much much thinner. Twenty years ago it was eight to twelve feet thick now it’s three to six feet thick; it’s much thinner. I think in consequence, when you get pressure on the pans they now crumple up. Last year from Ward Hunt Island almost to the North Pole we had only three big pans—big open spaces, the rest was just rubble. Twenty years ago you would have a big pressure ridge with lumps of ice the size of houses and cars all piled up–a significant obstacle—and then you would have a big open space. Now the pressure ridges aren’t that big anymore but there are no open spaces anymore; it’s just rubble and rubble. And the weather was fifteen to twenty degrees warmer. Yeah, you can say it was just a warm year, but I don’t think that kind of weather would have happened twenty years ago. That’s the way the weather is going. We had whiteouts and warm weather, you know May weather in April. By May the Arctic Ocean was turning to porridge. You couldn’t travel on it anymore. Whereas before in 1992 we traveled and it didn’t do that until the 22nd of June. Things have significantly changed.

Elizabeth: Have the changes affected your ability to travel on the Arctic Ocean?

Richard: I think, at least last year, it was not possible to ski, to travel from the North Pole back to Canada. Travel in May became impossible last year. There were three expeditions attempting to come from the pole back to Canada and none of them were successful. So I think that it is becoming more difficult. Maybe we will have a colder year this year and maybe there will be some more wind and it will be a bit easier, but definitely it is getting harder—there is no question.

Another significant change is last year for the first time the currents of the Arctic Ocean changed. Normally when you ski from Canada to the North Pole you are basically drifting east and south and we drifted west the whole time. Later on I found out that, yep, every current throughout the Arctic ocean changed last year for the first time. So something is really different up there than it was twenty years ago.

Elizabeth: What impacts or what effects would you imagine a trend that continued in this direction would have on polar exploration?

I have actually traveled a lot of Will’s route. I guess they might lose the snow earlier, especially on the land, because once it goes above freezing, there is not much snow on the land so it disappears quite quickly. So they could have a problem there, but on the sea ice they should be certainly good for a while. Although if [the ice goes out] earlier…it goes earlier now from Frobisher Bay than it used to, so definitely the time frame of their expedition has been shortened a bit.

Up at Arctic Watch, we’ve been there almost ten years now at our lodge on Somerset Island. Twice now we’ve seen electrical storms. And there are local people who have never seen electrical storms. It’s simply too warm. We are getting temperatures up into the low twenties in the summer now. I haven’t been there long enough to know if that is normal or not normal. But we’ve seen areas where there are steep banks that normally hold together because they are frozen but now the permafrost is melting and you have huge slides along the river everywhere there are steep banks. I don’t have enough experience to say, yeah that happens every summer, but I don’t think so because they wouldn’t be there; it would look different. So there is definitely melting of the permafrost in our area.

Elizabeth: Has that melting permafrost disrupted any infrastructure around you?

Richard: Not quite, but it could. Our lodge is pretty close to a steep bank so hopefully it won’t be too bad. But sometimes it floods into the river and the river goes really brown and the whales don’t like it. The beluga whales come into the mouth of the Cunningham River in the summer to molt and look after their young and they like the fresh clean water—it’s warmer and they like it clean and if it’s dirty they leave. So when we get these brown floods they leave. It’s not life-threatening to them—they’ll just go somewhere else, but it’s not very nice for us because we like to look at the whales.