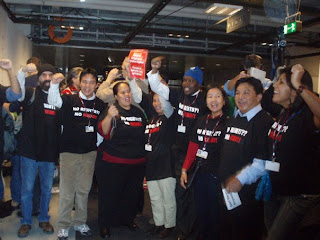 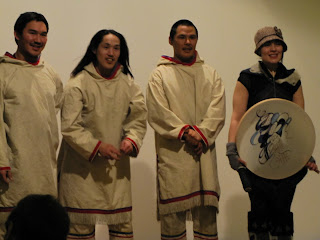 The call from and for Indigenous Peoples here at the U.N. Climate Change conference is critical and we’re making sure that we are heard, from Day 1 to the day after the last. With so many brothers and sisters from different lands of the Earth, we unite here in Copenhagen to make a difference. Not only do we have a diverse U.S. front, as far as Alaska with our sisters fighting to keep industries from drilling on the lands, and as far south as the Navajo nations fighting uranium, we span across the North American continent and every piece of land on this Aki (Earth). There are our Canadian brothers and sisters fighting the Tar Sands, Kenyan brothers and South American Natives fighting deforestation of their rain forests and forcible removal. It is imperative that we stand together and ensure our voice be not only heard but acknowledged, because it is us, as traditional and cultural people who are the sacrifice for the energy produced and consumed in the world. Indigenous Peoples of the world have united here at Copenhagen to be sure that our rights regarding the land and our culture because of our ties to the land are acknowledged in a treaty. Although we have world appreciation for our cultures and traditions, we would rather be negotiating than negotiated.

In appreciation,the World Wildlife Funds Arctic Tent centered in a Copenhagen town square dedicated a days events as Indigenous Day, featuring the Inuit Cirque youth above. Ms. Sheila Watt-Cloutier, a Canadian Inuit activist was a featured speaker, with whom I had a brief introduction to.