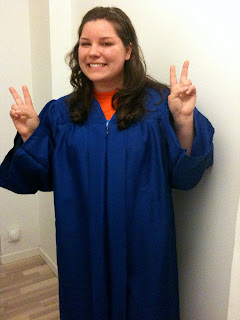 Today I “officially” graduated from Grand Valley State University – but in Copenhagen rather than Grand Rapids, Michigan. Instead of walking across the stage in the Van Andel Arena and shaking President Thomas Haas’ hand, I strolled the streets of Copenhagen with 100,000 of my closest friends. We walked, danced and chanted out way to the Bella center, the main site of the COP15 negotiations.

The march was split up into different blocks of people and organizations. The lead block of the march were the Indigenous people of the world, and Aurora, one of our Minnesota delegates was at the very front of the loooong line of participants. The rest of us were in the 5th block (there were 30 overall) with the YOUNGOs (international youth), 350.org and TckTckTck. I actually got to meet Bill McKibben, head of 350.org for the second time today! I told him, along with everyone else that I came across today, that I was graduating from college in Copenhagen.

Overall the event was peaceful and effective, despite some participants being arrested, demonstrating the solidarity in this movement for a clean and just energy future that exists between people from all over the world. What an experience it was taking part in an march with people singing and chanting in languages that I did not understand, but knowing that they were advocating for the same things as me – a Fair, Ambitious and Binding treaty.

Here is a brief glimpse of the march from my perspective: 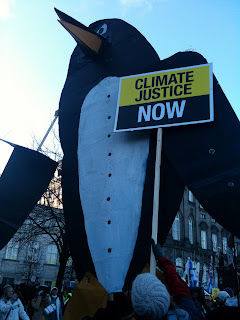 Most of the signs had a clear message, some reading “Climate Justice Now,” “There is NO Planet B,” and “Blah, Blah, Blah: ACT Now.” Thousands of signs, big and small, were used at the march making it very colorful and beautiful. 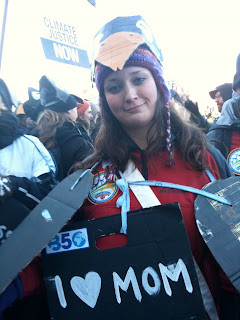 There were so many creative costumes, banners and floats made for the march. Holly, a fellow Expedition Copenhagen team member was a penguin with 20 other people, highlighting the effects that climate change has on certain vulnerable species. 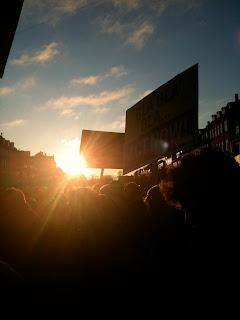 We actually got to see the sun outside of the Bella Center during the march. It was a beautiful, cold day in the city. 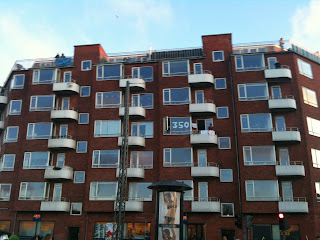 Citizens of Copenhagen along the route were hanging signs from their windows in support of 350ppm of CO2 and a binding treaty.

Today was a great way to spend my graduation. I have a passion to create a more just and sustainable future for all, and a dedication to start now and never stop. What a great story I can tell my children and grandchildren when this conference and the decisions made here will determine the future state of the planet. I feel privileged to be a part of Expedition Copenhagen, this team, this conference, this historic moment. Because this is what we all need to be doing- working with each other to slow global climate change and visioning a better world.