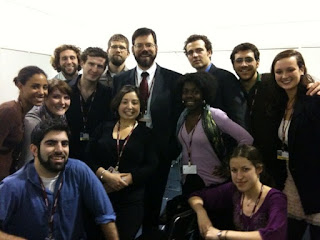 Don’t let the smiles fool you, we gave lead negotiator Jonathan Pershing an impassioned piece of our minds!

As I sat last evening looking at the thirteen faces of some of the most remarkable leaders in the US youth climate movement today, I had an incredible rush of emotions ranging from nerves to anticipation in thinking about the task that we were about to take on- in moments, we would be meeting with Jonathan Pershing and Todd Stern, chief negotiators for the United States at COP15. As we walked through the halls of the towards the United States Delegation offices a sense of excitement started to build, the fourteen of us would soon take on the fast taking, intelligent, and articulate negotiators as representatives of youth both in and at home.

The briefing was off the record, so I cannot blog about explicit content, but I will share the emotions and thoughts that went through my mind as the meeting finished. The immediate feeling that I had once our extensive discussion with both negotiators had commenced was pure exhaustion; exhaustion from hearing excuses and exhaustion from hearing that what we’re doing is not enough. I was so overwhelmed by fear and sorrow I began to cry, but as I looked around at the thirteen faces that had tears in their eyes as well, the faces of my friends and the current and future leaders of my generation, a new sense of hope and determination rose within me.

I can say, without an ounce of doubt in my mind, that I will continue fighting for a just, sustainable, and prosperous future for my generation and all generations to come and the best part about it is, that I know that I’m not alone! As youth from the , and around the world, we will work together until our elected officials step up and show the strong leadership and courage that is needed to ensure the survival of peoples and future generations.

Although it is impossible for me to describe the range of sentiment that I felt last evening subsequent to the meeting I believe that my friend, Whit Jones, summed it up quite nicely, “the hard hitting and difficult discussion led to a room full of tears, but the bright side is that people emerged more ready to go than ever.”