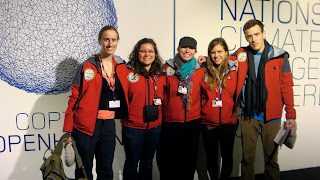 The international climate negotiations in Copenhagen are winding down to an end. With just four more days of talks left, and over 110 heads joining in the next few days, you can feel the restlessness of the Bella Center and even the world around the world. Will there be a deal, or not? Is it going to be legally binding? What will developing nations do it developed countries only sign a political treaty?

Expedition Copenhagen delegates are still advocating for the same three things in a new treaty that we always have been. We want a FAB deal- that is, a Fair, Ambitious and Binding treaty based on sound science. Why? Because the science is clear, and so it the history.

Developed nations have an ecological debt to pay to the rest of the world. We have contributed most to climate change in the form of greenhouse gas (GHG) emissions. Since there is not bubble over developed countries, then we have polluted the entire world. Developing nations, most specifically small island states, polar regions and coastal areas are already experiencing the many effects of climate change now. For them this deal means survival.

So we need to be fair in what we ask from all countries. Common but differentiated responsibilities is the phrase most often used to describe the fact that everyone needs to work to stop GHG emissions from rising, but that heavily industrialized and developed nations must work to pay off their ecological debt first. Requiring countries that have contributed little (if at all) to the problem is not fair.

We also need to be ambitious. We do not have to be dividing up the atmosphere into sections, and as so many bright yellow signs read during the march past Saturday, “There is No Planet B.” So our reduction targets must be based on the sound science of 350ppm of CO2 in the atmosphere with no more than a 1.5*C rise in temperature. The money we put our on the table to help countries adapt to climate changes that are already happening, and the money for new technologies needs to be significant. Developing countries are asking for $200+ billion each year to help deal with climate change happening back home.

And we need a legally binding treaty to hold countries accountable to reducing their emissions. A political deal is merely symbolic. Many developed countries, such as the U.S. argue that they need more time to create a legally binding treaty so that they can pass domestic climate legislation. But we have had time to discuss this problem for 20+ years, and the science and world are in agreement that action needs to be taken now. So this treaty must be legally binding, because again, we are dealing with the survival of people and the planet.

This week access to the Bella Center is severely limited to civil society. While this is very frustrating, I choose to look on the positive side. In Copenhagen there has been another “conference” happening alongside of the negotiations. Klimaforum is the people’s conference, and the list of events happening here in endless. While the negotiations can boast “celebrities” in a policy wonk’s book, Klimaforum has people like Vandana Shiva and Archbishop Desmond Tutu as speakers. These people have worked with the people most directly affected by climate change. Some of them are direct victims to business as usual practices from developed countries. I would much rather relay the message of these people back home to inspire people to get involved, than to work extra hard to weed through the web of politics created by top negotiators.

We also have a great challenge and opportunity to be effectively pressuring the U.S. and other developed countries to take bold action this week. We need to be strategically planning our actions, drafting up our policy positions, setting up meetings outside of the Bella Center and working with friends and family back home to apply pressure from the domestic side to negotiators. That way we will be in the Bella Center without having to physically be in the center.

Only four more days of negotiating left. Will there be a deal, or not?What will it look like? I do not know. But what I do know is that there are thousands (literally 35,000) of people working day and night to ensure that negotiators are feeling the heat. No matter what, the work does not end here. But I have hope that we will come out of these negotiations with something substantial and which will put us on the path to survival.