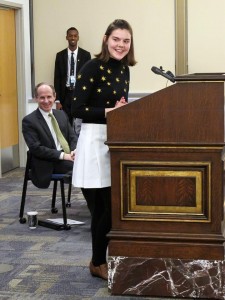 On March 14th, I joined over 100 high school and college students at the Capitol for the 2016 Youth Lobby Day to advocate for a racially, economically, and environmentally just implementation of the Clean Power Plan.

Our purpose wasn’t just to push for environmental policy, but also to have critical conversations about how the Clean Power Plan can cut carbon emissions while benefitting all neighborhoods in Minnesota, regardless of racial makeup or economic status. It was empowering to be a part of the community of young people who showed up to tell our legislators that environmental injustice affects our lives and needs to be addressed.

The day started with a Youth Summit with Governor Dayton, where I had the opportunity to share my climate story on a panel and moderate questions from the audience to the Governor. When I started joining activist communities in high school, I thought I had to choose between social movements for racial and economic justice or environmentalism, before I learned they are deeply intertwined. Like many students in the audience, I realized it was no coincidence that pollution was concentrated in low-income communities of color, such as the asphalt plant and foundry near my school, South High.

The youth in the audience filled the room with energy and challenged Governor Dayton with questions about hiring people of color for green jobs, stopping pipelines through northern Minnesota, and diversity in the Governor’s staff. Two other panelists, Janiece Watts from Neighborhoods Organizing for Change and Haley Gill from the University of Minnesota- Morris, shared why a racially and economically just Clean Power Plan mattered to them. One of the highlights of the Summit was when Governor Dayton gave an emphatic, “yes” when I asked him if he would veto any bill attempting to delay the Clean Power Plan in Minnesota. We closed the Summit by joining together in an environmental protest song!

After the Summit, it was time for meetings with our legislators. I met up with a few other young people from my district and we practiced our stories about the Clean Power Plan and our strategy for staying on topic. Some students were nervous because they hadn’t lobbied before, but there was an overwhelming feeling of support and spirit before and during our meetings. Our State Senator and Representative were in favor of the Clean Power Plan, but it still felt important to push them on how the Plan will be racially and economically equitable. Even though it was my third Youth Lobby Day, I wasn’t tired of discussing policy ideas with my legislator or hearing my peers share their personal stake in environmental justice.

We went big this year with our demands- youth in Minnesota want a 100% reduction in carbon emissions by 2050 through the Clean Power Plan. We don’t want trash burning as a clean energy option, as it places a significant public health burden on low-income communities of color. We also want the Clean Power Plan to take into account the legacy of environmental racism and promote clean energy jobs for people in frontline communities, such as low-income people of color.

Youth Lobby Day 2016 brought youth from across Minnesota together to advocate for an racially and economically just implementation of the Clean Power Plan. As young people, we realize climate change needs to be addressed, but it’s not only what we do that’s important, it’s how we do it. We will continue to fight for our vision of healthy communities and an end to the disproportionate impacts of pollution.