There are so many different levels at which you can interact at COP23.

My goals in attending were 1) to share the story of Minnesota’s clean energy leadership as a successful model, 2) to help explain to the rest of the world that thousands of Americans at the city, state, corporate, university, and individual level are still moving forward toward the Paris Agreement goals, with or without the support of the federal government, and 3) to learn as much as I can from the incredible resource of people here, in ways that will benefit our energy transition work at the University of Minnesota.

There are some 25,000 energy and climate experts from virtually every nation in the world here and more events than you can possibly attend. Today, I went to a wide variety of sessions and learned a lot. Here is a snapshot.

First, I attended the RINGO delegation morning briefing. RINGO is the research constituency that includes university faculty and researchers from around the world. Most of them pay detailed attention to the arcane details of individual sections and articles of official UN documents like the Paris Agreement. 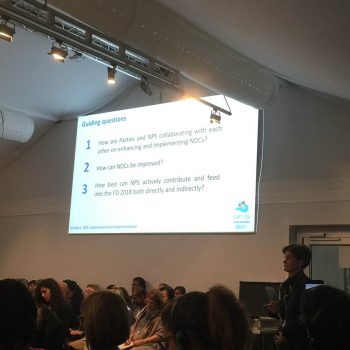 The topic was the NDCs, Nationally Determined Contributions, which make up each nation’s pledge under the Paris Agreement. The President said that we need to know about local action that could help meet national NDCs. He continued: “Today, we will not be negotiating. We will be talking to each other, and of course we will be listening.” Using the Talanoa spirit by including different sectors, both Parties and non-Parties, is the only way forward. “The Talanoa spirit isn’t just about being nice…it is honest constructive dialogue for the common good.”

UNFCCC Executive Secretary Patricia Espinosa added that different constituencies helped to set the agenda, conveying a shared sense of urgency for implementation of the Paris Agreement. “Our informal processes help us deepen levels of understanding that in a formal setting might be difficult to address. Government alone can’t do it. It requires participation of each and every one of us.”

A long list of speakers followed with specific comments on how local and state governments, small island nations, and companies are reducing emissions. They also addressed how to ensure that the energy transition is fair and equitable to workers in the coal industry and to vulnerable island nations, how to protect the interests of young people, and how urgent it is to accelerate the Paris Agreement goals. This meeting seemed to be a big step towards recognizing the importance of non-Parties to help determine the outcomes of the COP process, but it remains to be seen how it will influence the decision makers – the official Parties.

Another session I attended was about the clothing industry, which according to speaker Elin Larsson of Swedish fashion company Filippa K, is the second most polluting industry after the oil industry. Over 60 million people are employed in the industry around the world, mostly in low-income countries. Several well-known company representatives, including H&M, discussed their goals to reduce carbon emissions, deploy renewable energy and energy efficiency throughout their supply chains, reduce the enormous amount of clothing waste, and make cotton production sustainable. One key point is similar to energy markets – policies matter, and subsidies and policies should reward customers making the right choice. 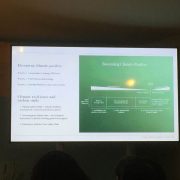 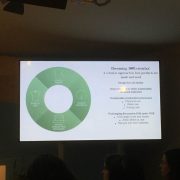 Finally, I attended a session that shared research from various experts about the trajectory of coal power around the world. I was quite surprised to learn that a number of countries, for example Pakistan, expect to increase their coal-fired electricity production by a factor of 10 times or more in coming years. A question was asked about whether people in developing countries without access to electricity would be helped or harmed by deploying more coal plants. The speakers agreed that in developing countries, putting money into coal is taking money away from development because renewable energy is cheaper and coal investment is risky. Additionally, coal plants in developing countries may help big cities and industry, but often do not help those in rural areas where there is no grid infrastructure or economic incentive to extend power.

This is just a snapshot of one day at the COP23. Stay tuned for more!