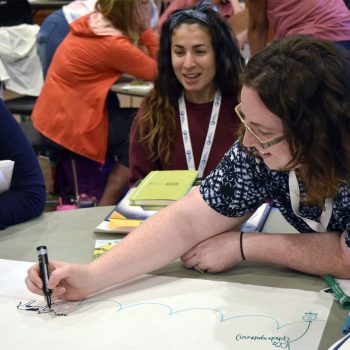 Climate change lessons and material doesn’t have to be isolated in science classes alone. This blog is number one of a four part series about the activities, lessons, and standards that teachers from various subject areas and grade levels are using to teach climate change in their classrooms. Content was collected from teacher papers completed for graduate credit through Hamline University after attending our 13th annual Summer Institute for Climate Change Education. Educators wrote about the importance of teaching climate change and the new ways they will bring climate change to students in earth science, chemistry, language arts, and other classes from grade 3-12.

Charles and Elise offer a discussion and plan on how they will use cli-fi (climate change fiction) in their at-risk high school and rural middle school English Language Arts classes.

The most immediate change to my curriculum is to modify the science fiction class I already teach to include more cli-fi. As soon as I saw the term cli-fi in the [Summer Institute] agenda my mind started racing. I already teach Octavia Butler’s ​Parable of the Sower​ as part of my End of the World unit.Butler describes her novel as a cautionary tale, and among the many things she warns about is global warming. In a speech given at Harvard in 1998 she clearly states, “​A character in the novel is Global-Warming. This is something that I really wanted to pay attention to . . . It seems to me that a thing as important as global-warming should get a lot more attention than it does. So I portray a world in which global-warming is doing things like creating a lot of erratic weather and severe storms and drought in California.”

I am also excited about the opportunities to make connections with another family that was forced to take to the road because of sudden and catastrophic changes to the climates. The Joad family in Steinbeck’s Grapes of Wrath are forced to take the the road in the dystopian landscape of the dust bowl and Great Depression.

I usually teach this book with an emphasis on the socio-economic issues because that is what is more relevant to my students, but as I learned at the Summer Institute a large part of social justice is climate justice. Changes in the climate will affect those on the boundaries of our economy first and most severely. Like the Okies in the dust bowl, my at-risk students are also going to be the ones most adversely affected by climate change.

I will also work with my school librarian to write a grant from our local education foundation to fund a cli-fi classroom library for teachers throughout the district. Ideally these books would be placed in science classrooms to help facilitate cooperation between environment science and language arts teachers.

I would like to use this as an opportunity to introduce a kind of book club based on cli-fi texts for the students. I would like to start a novel with the students by reading the first chapter or two aloud to get them engaged in the text and then shift over to more of a required, weekly reading assignment. This would allow students to use their time during [class] to get help from the teachers they need to on the days they are available, while still moving forward on the novel. I plan to create discussion questions to go with the texts so students can either meet in small groups, or we could hold a class-wide discussion.After speaking with Jenna, I am drawn specifically to The Boy Who Harnessed the Wind by William Kamkwamba, Exodus by Julia Bertagna, and Same Sun Here by Silas House and Neela Vaswani. After speaking about the content and themes of these texts, I feel they would fit both the interest and ability levels of the students I teach. I am also interested to hold discussions on the theme of immigration in the novel Exodus because I routinely have a large number of students with Mexican backgrounds. I look for this to be a genuine and meaningful discussion on immigration in our country today. Due to the intimacy of the topic for some students, I will not start with this novel. We will start it later in the year after I have built up a relationship with the students.

Check out Climate Generation’s #TeachClimate Network and Book Club for more cli-fi reads! Do you have creative ideas on how to teach climate change? Engage with our Back to School hashtag #teachclimate365 on Twitter at @climategenorg.