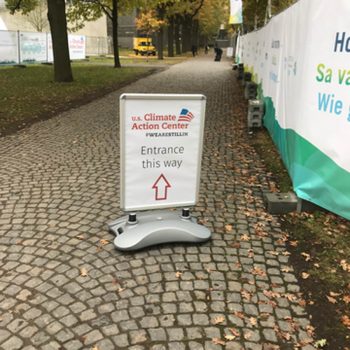 Because the U.S. refused to pay for a pavilion this year—for the first time ever—private parties, including former New York mayor Michael Bloomberg, funded the U.S. Climate Action Center as a replacement. The Action Center is not in either of the official Zones here at COP, but instead is in a dome between the Bula and Bonn Zones. 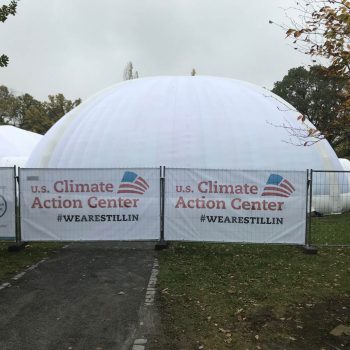 Since the movement started, more than 2,500 leaders from local governments, places of worship, boardrooms of private businesses, and college campuses have signed the We Are Still In declaration. 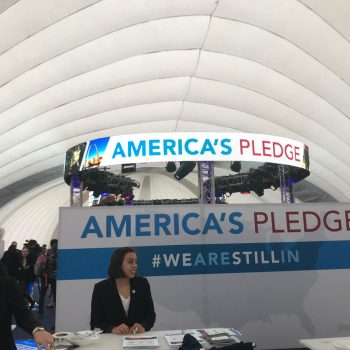 Minnesota is one of the states that has joined the U.S. Climate Alliance, pledging to step up and do more than they had planned to do otherwise to reduce emissions. I’m proud that Governor Dayton has stepped up and signed the pledge to join the U.S. Climate Alliance. But signing a pledge is not enough. We need carbon reductions to be happening faster and to go deeper than a business-as-usual approach. This requires action.

Other states that have joined the Climate Alliance have demonstrated how to take bold action. California, Colorado, Massachusetts, New York, Virginia, and Washington all have executive orders requiring state-level climate action. Luckily, our state agencies have broad authority to take actions without the need for additional legislation. Governor Dayton needs to urge his agencies to do what they can to plan for and mitigate climate change before it’s too late. He can, and should, do this through an executive order.

I listened to panels today that included different sectors of sub-national participants making progress on reducing emissions. There are many paths forward. I heard a VP from Berkshire Hathaway talking about how one of its utilities—MidAmerican—has a vision of 100% renewable energy by 2020. They’re already most of the way there, and they’ve done it without an incremental increase in customer costs. I heard Microsoft talking about internal carbon pricing and how it’s helped them reach their goals while investing in innovative projects around the world. I heard California lawmakers talking about their cap-and-trade program and the intentional components to ensure that the money that program generates is reinvested in the communities most impacted by pollution and climate change. And I heard the mayor of Carmel, Indiana—a solidly red city in a solidly red state—talk about his pledge and his actions to make his city a leader at reducing climate change.

There are many different directions Minnesota could take with its leadership on this issue, but it needs to head somewhere. Riding the coattails of the bipartisan passage of the Next Generation Energy Act in 2007 will only take us so far. Now is the time for sub-national actors to step up, and I hope Governor Dayton seizes the opportunity.