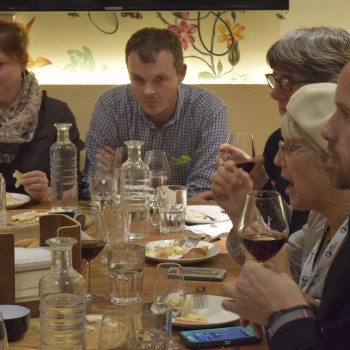 Climate change is affecting every part of our lives, including our health, economy, agriculture, and even that much-needed morning cup of coffee or the lovely glass of wine you enjoy having with friends. Some of the climate discussions are so big and broad that I thought I would bring it back to a couple of things that will likely affect most of the people I know. I’ve been a part of two interesting sessions this week that provided insight into the struggle that each of these two industries are having.

Climate change impacts our coffee supply:
On Monday, I attended a workshop in the Green Zone called Coffee and Climate Change. The coffee sector is particularly affected by climate change. Over 90% of the world’s coffee is produced in developing countries, and these 70 countries employ over 100 million people worldwide. About 70% of producers are small family farms, and woman provide the majority of the labor. This presentation hit home for me in part because Climate Generation has a wonderful neighbor in the Greenway Building in Minneapolis: Peace Coffee, our long time partner and advocate. We have heard stories from Lee Wallace, Executive Director, of small producers who are struggling to survive due to a changing climate. Climate change is already affecting coffee in many ways including:

Researchers used 19 global climate models to determine where coffee production may be changing. They’ve found that everything will change. There will be a substantial reduction in the area that is able to grow coffee, by up to 50 percent. Since there will be 50 percent less arable land, coffee growers will have to double their crop yields by 100 percent and yet still anticipate a 25 percent reduction in production and 50 percent higher prices even for lower quality coffee.

Not very good statistics if you enjoy that strong cup of Joe in the morning!

Climate change impacts wine production and quality:
On Sunday, Jeffery Iverson, writer and wine connoisseur, provided a very special evening for our education ambassadors, hosting a discussion on wine and climate change. As Jeffery stated, “wine is essentially a record of a climatic year.” Climate scientists like to call the grape vine the planet’s canary in the climate coal mine. During COP15 in Copenhagen, for the first time ever, the 8,000-member independent French Winemakers Association insisted that bold measures be taken to reverse global warming, stating that the French wine industry was at great risk. Harvest dates over the last 35 years have moved up more than two weeks on average because of unusually warm growing seasons. Grapes are reaching their sugar ripeness before their aromas fully develop, which means that alcohol levels soar while acid levels are dropping, forcing wine maker to resort to chemistry to produce a drinkable wine. Producers are reporting “total climatic disorder” with Spring arriving early, buds coming out, then being hit by frost that kills all the buds. Two years ago, Champagne, France experienced an 80 percent crop loss in their grape harvest.

Champagne is the quintessential French wine, but it has become more and more difficult to make. The first wine we tasted was from a Champagne producer, Didier Pierson, who took over his long family Champagne business only to find it more and more difficult to sustain. He ultimately moved his sparkling wine (no longer able to call it Champagne) business to England, and last year took the top prize for sparkling wines, beating out many French Champagnes.

In addition to relocating to cooler climates, some wine makers are also trying to bring back more drought-resistant varieties or using a canopy on the vines (similar to shade grown coffee) to provide protection for the grape. You can expect much more change within the world wine map, with Australia and New Zealand likely not able to produce wine at all in the future, while northern climates like Canada are already seeing an increase in production. At a minimum, wine will become more expensive, with a lower quality expected for some wines.

Last August we hosted a Wine & Dine for Climate fundraiser at Alexis Bailey Vineyards in Hastings, Minnesota. Owner Nan Bailey has been experiencing many of these changes at her family-owned vineyard, and due to our hotter temps in Minnesota she has actually seen an increase in her quality of wine. Meanwhile, California is suffering through a devastating wine market due to drought and heat. It’s clear to see that, like many aspects of climate change, that there will be winners and losers. The bottom line, however, is that these changes are disruptive and we should do all in our power to minimize them by effectively tackling this issue.