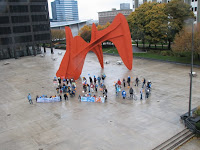 It’s a good thing that residents of Michigan are used to cold weather! The 350GR event was a success amid some freezing rain and wind. We braved the cold and had an amazing day bringing attention to 350ppm, the safe upper limit of CO2 that we need in the atmosphere. Internationally there were over 5,200 actions in 181 countries- and we definitely felt solidarity with our friends in other nations on the 24th.

The event began with music from Midwest Skies, an mix of alternative rock and punk sounds by three students at Grand Valley State University. The boys played great, giving us a taste of some of their songs along with some throwbacks to the 90’s which got the crowd moving and singing.

In between songs student leaders spoke about what they are doing on their campuses to promote sustainability. Other speakers included Kristie Klomp of the West Michigan Environmental Action Council (WMEAC) and Lee Sprague from the Sierra Club of Michigan. Both spoke about the critical need to recognize the consequences of climate change if left unattended, and they both stressed the importance of getting involved. 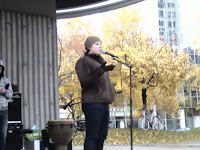 I also gave a speech about the need to get engaged in the movement. As part of Expedition Copenhagen, a delegation of Midwest youth to the UN climate negotiations with the Will Steger Foundation, I have a unique opportunity to be a part of the negotiations happening in December. But some of the most important work needs to happen today, in the next two months, in preparation for these negotiations. We need the US Congress to pass a strong climate bill that will allow us to be leaders in the clean and just energy revolution. So we need everyone to be coming to events like 350GR, to be making phone calls to their elected officials, and to be learning about global climate change and talking with their friends and family about the issue.

One elected official in the city of Grand Rapids understands this concept. Mayor George Heartwell joined us for the march from Rosa Park Circle to Calder Plaza where we took our 350 photo. Since he first stepped into office Mayor Heartwell has been a strong advocate for sustainability. In an interview with him early last week he told us the story of how Grand Rapids started using renewable energy. With 20% of the city’s energy now coming from renewable sources, Mayor Heartwell has challenged us to have 100% renewable energy by 2020, and he believes this is more than attainable. 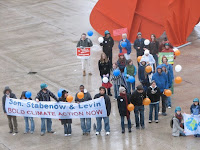 As the march approached Calder Plaza organizers led individuals to their places in the numbers 3-5-0. James, the event photographer, and I climbed up on the man lift to get into position for the human aerial photo. Participants held blue, orange, and white balloons, and signs while learning the 350 song. As we started taking the photos I felt overjoyed with the beautiful sight before me – 60 friends representing the number 350 in front of Grand Rapids City Hall, Calder art and the Gerald R. Ford Federal Building, advocating for federal and international action based on sound climate science. Simply wonderful.

To see more pictures for our event check out the 350GR flickr page.